Preben Juhl Fabricius (1931-1984) (left) and Jørgen Kastholm (1931-2007) (right) were driven by a mutual mission to make form a pure derivative of function. Both were architects and graduated from the Danish School of Interior Design, where they studied under Finn Juhl and subsequently with Arne Jacobsen. Although they partnered for less than a decade, creating only a handful of designs, Fabricius & Kastholm left a legacy of work honoured in museums around the world — from the Museu de Arte in São Paulo to MoMA in New York and the Musée d`Art Moderne in Paris.

While Fabricius was trained as a cabinetmaker and Kastholm as a blacksmith, this balance of perspectives helped define a new kind of luxury, adding an elegant facet to the prevailing functionalism of Danish Modern. Sleek, elongated shapes, streamlined symmetry and a modern mix of materials characterised pieces commissioned for international airports, penthouse apartments, high-profile lifestyle magazines and even early James Bond films.

The P376 pendant lamp is a perfect example of Fabricius & Kastholm's subtle architectural slant on design. Originally conceived in 1963, five concentric shades create gradations of curves towards the middle of the lamp to emit a soft, diffused light. The discrete placement of the shades and the silky aluminium finish culminate in a cohesive expression that is both iconic and enthralling. 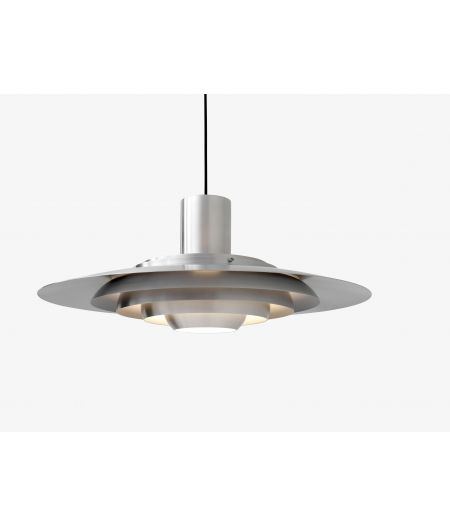